The Editor is Dread, Long Live the Typo!

Posted on August 31, 2012 by observeroftimes 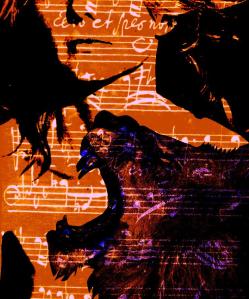 This week my inbox yielded a blurb by an editor spruiking an evening course. Her approach to grammar sounds practical: embracing ambiguity due to the relativism of rules. But I winced at her misspelling of that classic title, the Kama Sutra.

Is there a difference between kama, or love, and karma, or retributive justice? Some pundits (or punsters?) might argue there isn’t. But I’d say the difference is no less radical than that between, e.g., chance and chancre, buy and bury, or fiend and friend. In contrast, it’s no great conceptual leap from impudence to imprudence, and soothing the savage beast (even if it begs the question of species) is surely akin to soothing the savage breast. The impact of a rogue r all depends on what position you’re in.

As a reader, I tend to range fairly freely across decades, even centuries, and never have I seen more typos than in books published this millennium. Why? Don’t we have more help than ever, thanks to the gang at Microsoft etc.? But while I love how Word, hit-and-miss as it is, auto-corrects my sporadic dyslexia, I wish it could be flexible with regard to passive sentences. I’m reminded of David Auerbach’s words in his comprehensive n+1 essay:

But we will not see computers acquire minds anytime soon, and in the meantime […] because [they] cannot come to us and meet us in our world, we must continue to adjust our world and bring ourselves to them. […] Their dumbness will become ours.

Obviously, this has implications for much more than ease of communication. Auerbach is talking about reductive ontologies. Yet it’s humbling to realise how many writers not just rely on but blindly trust Word’s fallible spell and grammar check. Of course, some lack the resourcefulness to even do that. The following random examples are borrowed from online critiques by wannabe writers, some of who’ve already self-published, if for no other reason than that they can. In some cases the typos result from touching more than one key at a time, or pressing it twice or not hard enough if at all; in others, letters get transposed because fingers fall short of the speed of thought; and in others, command of spelling, grammar and/or punctuation is poor:

missing aposdtrophe?
I was wondering a good part of the wat through
It is well written although their seems alot of information that has been crammed in unnecesaarily.
For me, this is a very well realized and exectued story.
You deal with this defly and intelligently.
On a techincal front
I just coudn’t get into it.
Here’s a fdew notes I made.
Maybe add in another sentence to spead out the information a little.
I wouldn’t want to offend, especially as you clearly are very intellegent
which interupted the flow
but that is surely less intriguing that somethign naturally intriguing
its also overly intellectural
the constant switches also don’t help to ‘stablize’ the story
Who isn’t fascinated by coincedences
the dialogue was believeable
I found this story so short one cannot form any definate conclusions
Can’t find the word “remaindered” in the dictorionary
you flick between point of views too much
it didnt appear to contribute anything
I read it again and still dont.
Very liitle constructive criticism to offer
suicidal people coming together is intereresting
If so my appologise.
good luck eith this.
I still did’t knowwho was who*

Would you trust the feedback of reviewers such as these? If they can’t spare the time to reread their own cursorily tossed-off comments, how could they suppose you’d feel they’ve given your work the thought it deserves? Because the thing is, in our socially networked culture where everyone’s a potential customer, they lose an opportunity for self-promotion, to put it subtly. Nor can all of the above errors be chalked up to haste; some humans can make computers look not just smart but kind and polite by contrast.

But with so many humans generating countless errors 24/7 – whether because they’re time-poor or distracted or they’ve progressively lowered their standards – errors become the new norm, along with diminished vocabularies. How can an overqualified editor hope to be relevant in this climate? Because if the pool of widely known words is shrinking (and don’t trust me, go check out Twitter), shouldn’t the resultant puddle (smidgin English?) be able, in its new simplicity, to sustain greater variation?

In his TED talk, ‘Do schools kill creativity?’ (like, DUH! – a rhetorical question), Sir Ken Robinson, English educationalist from a working-class background, says: ‘creativity now is as important in education as literacy, and we should treat it with the same status.’ What he neglects (because it’s beside the point of his thesis) to mention is that some, or even many, forms of creativity depend on literacy. Where would film and theatre, let alone prose and poetry, be without it? Besides which, minute precision counts in fields as diverse as ballistics, surgery, aerospace engineering, forensics and gene mapping… And who wants a pubic hair in their soup or scratches on their CDs? If I’m planning a plane trip I don’t need a pilot with an English Lit degree (and who knows for how much longer humans will be required in the cockpit?) but nor do I want him or her confusing knobs and dials at all, let alone as often as wannabe writers key in typos. And if you, as a writer, are taking me on some flight of the imagination, I don’t want shrill noises and random jolts unduly taxing my concentration.

Do we as a consumer society, immersed in narcissistic diversions, undervalue our inner worlds and the power of language by which we might affirm them? I’m not proposing a priesthood of editors and schoolteachers – an elite that pays lip service to unity while suppressing independence – but is it preferable to be known by the prospects one’s journey through words evokes or by one’s typographical impedimenta?

* So if you aim to self-publish and can’t spot what’s wrong in all instances listed above, you might want to at least employ a copyeditor.