The soul that heals 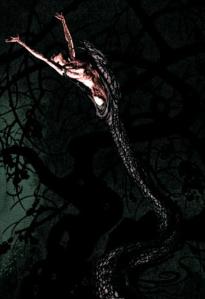 A groundbreaking essay collection, The Plague Story (2020), by linguist and blogger Simon Sheridan proceeds from a sobering premise: in February–March 2020 ‘there was a battle in the public discourse between two competing narratives: the plague story or the flu story’. Citing authorised sources (the US CDC and Wikipedia), Sheridan notes that there’s no firm distinction between the two. But with a helpless public at the mercy of experts, facts don’t matter because ‘the interpretation of those facts is what is at stake and essentially it comes down to who has the power to enforce their interpretation (p. 82).’

The story now reshaping the West takes its cue from Hollywood: scientist as hero. But its structure (‘plot’?) is based on an ideology, not virology. The flu story couldn’t disrupt business as usual. Is the disappearance of countless small businesses in just two years – while huge corporations have made record profits – an accident?

Medical science saving humanity from the cruel forces of nature: that myth reshaped my life, literally, before I grew up. And even now, two stories exist to account for a lateral spinal curvature. One says scoliosis is ‘idiopathic’ (mystification that means the experts don’t know what causes it) and treatment involves major surgery to insert metal hardware and fuse vertebrae, restricting movement permanently. The other story says that habits can worsen the condition, yet exercises and bracing can reverse it. The former story gives the specialist all the power: the patient need only submit and be eternally grateful.

My parents fulfilled the latter script, never once doubting the family doctor. A heavy smoker who later died of lung cancer, he supplied the initial referral to a yet more hallowed expert, who referred me to the ultimate specialist. Old enough to apply for a driver’s licence, I was too young to give legal consent for a procedure that would affect me alone. Of course I was informed of the downside: no physically risky activities such as horse-riding, which I loved. The surgical solution would impair my shock absorption. Without the op, though, I’d become even more deformed and die young. It didn’t really sound like a choice. (Vaccination or excommunication?)

Predictably, by then – five years after the diagnosis – my curvature had worsened enough that the idea of not looking freakish when naked held a certain appeal. I’d taken the wrong fork in the road, been told the wrong story from the beginning. (Decades later, my spine has reverted to its earlier S-shape.) Only as a young adult seeking help to pick up the pieces did I realise that healing holds scope for active participation vs. passive faith in salvation through glorified technicians who treat the body like a machine.

If not for all the debility and pain I suffered after the op, I mightn’t have met an alternative healer with whom I had a relationship. And during that phase, through a combination of mind-altering practices like ritual magic, sexual tantra, Iyengar yoga and smoking ganga, my consciousness, such as it was, expanded too far too fast. At which point another fork appeared in the road; two competing stories, each framing the other as tragedy.

Which path should I take? One, fraught with disorienting psychic events, could be called a premature kundalini awakening: an Eastern slant on a perilous path of spiritual initiation. The other, well trodden in the West, could be called psychosis and arrested. Positioned outside the Eastern tradition – I had no guru – and alienated from the Western tradition, how should I choose? It didn’t help that I was suicidal. My healer-teacher partner was out of his depth. The shrink I saw offered to write a prescription. My partner’s students were free-spirited addicts. The shrink’s schizophrenic patients were heavily medicated. I steered clear of cannabis, quit the shrink, and turned to meditation. Medication might have stopped the terror. But it would also have suppressed the visions and the bliss. One story guaranteed greater aliveness and all its challenges; the other promised premature deadness. One meant trusting myself, or rather, what I might become: more fully developed. The other meant trusting a sleazeball behind a desk and/or drugs with gross side effects, whether they restored so-called sanity or not. I chose the less travelled path. And so, decades later, the journey of integration continues, even though it took me only months to disintegrate. Do I have any regrets?

Life on the margins hasn’t been child’s play, but over time I’ve noticed that success as defined by our society doesn’t bring happiness either. No pay-off for conforming can ever be enough. But we stick with that story to the extent that we fear the unknown depths of our psyches.

Soul – an ambiguous word. And a very versatile concept. As a noun it’s been used and abused by more than one religion. Most commonly understood as the part of a human that survives death, its presence in a living individual implies, if not holiness, wholeness – and the chance for salvation denied someone who’s sold their soul. How often the word ‘soulless’ is used to describe contemporary life, while ‘soulful’ tends to sound nostalgic.

In keeping with the general trend of retiring the concept of soul as an attribute of what still gets called the self (though that increasingly dubious notion is in decline as well), Wolfgang Giegerich (b. 1942), a third-wave post-Jungian psychologist, has devoted his long career to reclaiming the concept of soul for depth psychology or, more specifically, ‘psychology as the discipline of interiority’. In What Are the Factors That Heal? (2020), his first book on the practice of psychotherapy (or soul healing), he writes:

Medicine is fundamentally utilitarian and technological in outlook. What is important in our context is that the medical mind starts out from the disease, from the absence, from the lower category, and strives to produce health. This is a bottom-up approach. […] Jung spoke of the soul as a self-regulating system. / So even if empirically the healthy soul is absent, as psychologist I start out from the higher level, from the presupposition of the healthy, self-regulating soul that has everything it needs within itself and take this as my actual standpoint, health can only come from health, not ex nihilo, from absence of health. It cannot come merely from the application of the right therapeutic means, not from pragmatic usage of the appropriate human, social interactions on the empirical level, within the social arena.

Not that Giegerich is offering medical advice. But, reading between the lines, it seems fair to infer that neurosis (if not delusional psychosis) plagues our society. And yet there’s a parallel narrative unfolding in its shadow. To those circling the sterile light of the mainstream narrative, that shadow story sounds like madness. And the mad must be locked up (or down or out).

Astrology has names for this shadowy domain. And the house of self-undoing is one of them. From the outside, it can be seen to contain prisons (crime), asylums (insanity), hospitals (death and disease), libraries (vast knowledge), wilderness (including viruses), dreams (or nightmares), hidden enemies, secrets kept from us (often by ourselves), the unknown, the unconscious, solitude. From the inside, it’s a place of introspection. Jung got to know it well.

Like Loading...
This entry was posted in books to read before you die, the life of the writer, the sceptic's guide to astrology & more and tagged astrology, corporate capitalism, depth psychology, healing, ideology, initiation, interpretation, Jung, kundalini, medical science, narrative, psychiatry, psychology, psychosis, psychotherapy, science, scoliosis, Simon Sheridan, soul, specialisation, storytelling, The Plague Story, the psyche, the self, the shadow, vaccination, What Are the Factors That Heal?, Wolfgang Giegerich. Bookmark the permalink.

5 Responses to The soul that heals