Is ignorance bliss or is it just empty space? – the case for reading 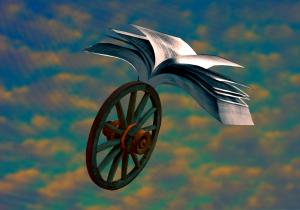 In a running dispute between a talented writer friend and myself, concerning the friend’s lack of interest in others’ fiction, my case goes something like this:

Of the large volume of unpublished fiction I regularly see, the least original work most often comes from beginners who baulk at reading (or so it would seem from their unfamiliarity with the conventions of, like, basic grammar). I believe that if my friend (let’s call him ‘A’; and OK, research has shown that men read less fiction than women) were to read more, he’d discover a diverse range of approaches from which he could borrow to refine his own. Of course, highly accomplished writers, too, can lack originality, but that’s a matter of temperament, as distinct from a default setting.

My all-time favourite fiction exists thanks to authors who read widely (or did when alive); both classics and the cutting-edge work of peers have moved and inspired them, and they’ve tended to improve with age, retaining flexible minds. My own work was slow to develop until I began to read more critically, choosing books for their cultural influence, not just those with subjective appeal. Around about then, it began to occur to me just how derivative most fiction is, rehashing tropes its authors have absorbed from ubiquitous Hollywood formulas. Done well enough it might sell, but it’ll never enter ‘the canon’ – any mention of which runs the risk of eliciting A’s scorn or, worse, indifference. Scorn used to be my defence against much of what I was force-fed at high school. And I still find some of the classics dry, to put it mildly. But others are revelations: books as old as George Eliot’s Middlemarch (1872) or as new as, say, David Mitchell’s multi-genre Cloud Atlas (2004) – not to be confused with Tom Tykwer and the Wachowskis’ film adaptation, a partial failure (for which I don’t blame Tykwer).

While I salute A for seeking to market his books using tools such as Twitter, there’s no substitute for reading a range of contemporary fiction to research what today’s reader actually buys (researching what they want is rather more complex; they’re much more articulate on what they don’t want – a malaise that seems especially prevalent in overfed capitalist democracies; why else would the current Opposition party in Oz mount an election campaign based on smear tactics instead of disclosure of viable policies?).

Without having done systematic research, it seems obvious to me that consumers today are in general buying more books than they have time to read (along with more food than they can eat, more clothes than they can wear, more real estate, 4WDs, TVs etc. than they need). As for why, thanks to digitisation and online stores, books have never been cheaper, impulse buying is all too easy, nor has there ever been more books, book clubs, celebrity authors, films adapted – however unfaithfully – from novels or short stories, and don’t get me started on marketing hype. Just like the eyes are bigger than the stomach, the scope of the imagination exceeds the attention span.

In contrast, some writers apparently feel they must limit their reading to spare their egos. I once knew an author who fasted from books while pounding out a first draft, supposedly to avoid the risk of influence. (How I wish Joyce, Kundera, Atwood, Hazzard and more would rub off on me, as my work appears impervious to a diet rich in genius.) Did that author’s first commercially published novel justify such self-denial? Its innocently clichéd plot would seem to suggest that influences deeper than style date back to one’s teens or childhood, and that for commercial purposes, the influence of genre-specific guidelines can’t hurt.

Yet, my brilliant if stubborn friend A prefers to work in relative isolation. Professing to have a very small ego (is that why it needs more than normal protection?), he argues that, in a universe with an ever-increasing degree of detail, innovation applies to increasingly tinier things until improvement loses its meaning (I paraphrase). So A would rather reinvent the wheel.

Forget the wheel, I say. What about shifting the game to a whole other level? It’s never too late (because that’s a factor: fears re diminishing time in which to ensure immortality, albeit just on Amazon, by birthing some magnum opus with a message); despite not yet knowing how it feels to be A’s age, let me shout it from the rooftops, it’s never too late to reinvent oneself.

The increasing degree of detail in our universe mirrors science. With telescopes, microscopes, X-rays, radar, quantum mechanics etc. – tools, schooling and formulae of progressively greater refinement – we’ve been prising matter apart for centuries, to find not God, soul nor ‘Self’ but just new frontiers of ‘empty’ space – which, instead of disproving that gods exist, tends to suggest we’ve displaced them, taken their jobs, to be in our turn made redundant by technology. What does ‘OMG’ even mean? But one needn’t read to know that. Now where was I?

How about if I substitute the word ‘choice’ for ‘detail’ in A’s equation? And so, in a universe with an ever-increasing degree of choice, where innovation applies to increasingly tinier things until improvement loses its meaning, consumerism is the form a secular version of worship takes. In such a universe, if science were the eyes, capitalism could pass for a stomach. Science makes discoveries; capitalism seeks to incorporate them. (Like the out-of-sync eyes and stomach, they belong to one unco organism.)

If religion (typically demonised as anti-science by zealous atheists) had a worthwhile purpose, it might be to keep the ego in check, to suck in the overstretched stomach of capitalism, to maintain a view of the feet, keep perspective. Because the ego, like a stomach inflated with junk food, is insatiable. And writing, whether or not it succeeds in the marketplace, feeds the ego. In contrast, reading, if it taxes one’s powers of concentration, tends to restore perspective re one’s ultimate unimportance. Not unlike meditation, it can discipline the mind. In the sense that darkness lends meaning to light and awareness of death intensifies life (witness how Western avoidance of death today parallels depression and obesity epidemics – symptoms of feeling empty?), so, reading lends meaning to writing.

Is my ego reduced to rubble whenever I read great fiction? Absolutely. But the ego can always be rebuilt. And skills that we can use to still or at least subdue it are helpful because, apart from the fact that we’re all going to die and denial can make the process more painful, it’s hard to write more than one convincing character from the ego’s perspective. It’s not geared for empathy. So an author’s ego might try to prevent him or her from stepping into the shoes of those characters that don’t share the author’s pet views.

Like Loading...
This entry was posted in the death of the reader, the life of the writer and tagged capitalism, characters, classics, Cloud Atlas, consumerism, contemporary fiction, David Mitchell, ego, George Eliot, Middlemarch, religion, science, the canon. Bookmark the permalink.

1 Response to Is ignorance bliss or is it just empty space? – the case for reading