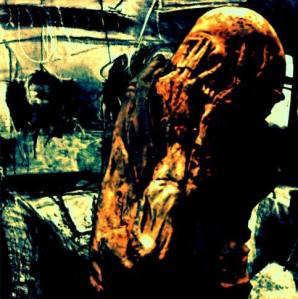 Six subjects down, two to go; the end was in sight. And with the penultimate ‘Writing Seminar’ behind me, I’d be free to focus exclusively on my own project, with a supervisor. Meanwhile, this class would confront me with the last of a series of hoops to be jumped through: three set texts to read, the first of which we’d covered in depth in Nonfiction, the second of which I bagsed for the topic of my seminar, and the third – Andrew McGahan’s The White Earth (2004) – chosen by our subject coordinator because, despite being technically ‘ham-fisted’ (his word), it had won awards.

Dr M (for Marxism? Money?) had a more professional edge than any of my tutors to date (excluding the Editing tutor last semester). As Dr M defined his preferences, strengths and expectations, I felt hopeful that I’d get my money’s worth ($2424 less 10%) again. During the midyear break I’d done my homework by reading his sole published novel, which trumped other tutors’ books I’d read with its self-conscious postmodern comedy. After five female tutors and only one (wussy) male tutor, I could forgive the confident Dr M’s blind spot re gender politics. Lopsided enrolment – two men and 13 women (though only 12 came) – was predictable. But the reader Dr M had compiled sampled 10 men’s vs. four women’s writing, with the longest works (i.e. the two novellas) written by men, like two of our three full-length set texts. And the films we studied – All About Eve (1950), Election (1999), and two versions of Lolita (1962, 1997) – just happened to be all about women or girls, directed by men.

This didn’t make reading or class discussion less fun – once we got our act together. Week 1 was just introductory and Week 2 not much better. After some talk and one student seminar, Dr M wheeled in a telly. We were left in the dark to watch Election while he got an early mark. I got bored, having seen Alexander Payne’s comedy before, though I learned in Week 3 that my blasé critique wasn’t PC. Still, I’d made a worse faux pas prior to the screening, saying that only a very small percentage of what I write is meant for others’ eyes (many professional writers keep their first drafts private), and that if anyone saw the rest I’d die (OK, I lied – at least three snoops that I know of have read diaries of mine; not that they’d have noticed the writing in their detective frenzy). As if embarrassed, Dr M promptly steered things back on track, supported by a former actor who scorned writing ‘for purging or self-expression’. Outnumbered, I pulled my head in. But hey, what about research? What about recording ideas? What about practice of one’s craft? Don’t real actors spend far more time rehearsing than performing? What about all the bloopers that wind up on the cutting room floor? Why would this ex-actor think that writing is any different? Unless social networking has programmed us not to value our privacy; or capitalism promotes commodification of our inner life; or digital culture conditions us to turn ourselves inside out, trading potential psychic powers for dependence on binary code?

A night or two after Dr M’s crit of the first piece I workshopped, and his admission that he was ‘embarrassed’ at not having got what I was doing (re my experiment with second person), as he ‘[knew] a lot about point of view’, I had a dream; inspired, I’d guess, less by him than by my plans for a novella:

I’m in a semidetached terrace where I think I’m going to be living, & I go into a front room & see the door to another room & feel fear re what’s behind the closed door, but I open it & this grotesque man who looks reminiscent of a mummy bursts out & goes for me … & I wake up with my heart racing.

The thing is, while I write a draft, it literally is where I live, for at least six months, but often more like 12, at a stretch; and some of what I find while occupied by, or occupying, that project naturally happens to be grotesque. Which reminds me – it was from Dr M that I first heard news of David Foster Wallace’s suicide. As I grappled with shock, he said he didn’t like Foster Wallace’s writing; but the death of a fellow middle-aged author (albeit one of far greater stature) had, I saw, raised the spectre of his mortality. That same night, he referred to our ‘building up to writing longer work’, as if oblivious to the fact that we weren’t all beginners (one student had made the Vogel Award shortlist two years before). The time had come for us to commence our ‘Professional Writing Project’, the MA course’s crowning glory (‘designed for students … ready to work independently’, as I’d been doing before I enrolled and got sidetracked by having to jump through hoops). I was excited at the prospect of trying something new. I’d never attempted a novella and this would be experimental to boot. Dr M dutifully warned me that publishers mightn’t consider it – unless I stretched my projected word count of 30K to 40K (in the end it blew out to 50K, but that’s another story). Why wouldn’t they? An ideal form for today’s readers’ shrinking attention spans, a novella can be read in the time a feature takes to screen.

According to Dr M, not only is Flaubert’s Madame Bovary (1857) the most perfect novel ever written, but very few novels work in a sustained way – even those of the world’s greatest writers (e.g. Don DeLillo). Curious re how he’d define ‘perfect’, I asked whether his version of it corresponded directly with reading pleasure. He didn’t answer my question; maybe didn’t understand it? But as ‘Sex and the City’ columnist Candace Bushnell once said of Flaubert’s and Tolstoy’s novels about two-timing women who top themselves, ‘those books are written by men and they never really get into the heads of those characters.’ (She also said ‘One writes books because one is trying to recreate reality’, which, for reasons I’ll come back to, sounds a little naïve to me, but I take her point about Emma Bovary, who never engaged me emotionally.) And I suspect that the touting by many leftists of Madame Bovary’s perfection points to its being deemed PC, not just to its technical genius.

Having read my Lolita essay, Dr M asked me if I’d written features. No, I said, then recalled all my astrology articles. He looked awkward (because Marxists type others by class, not by star sign?). While flattered by his disbelief that no-one else had told me the quality of my voice would be perfect for features (I’d admired his in the SMH’s Spectrum lift-out), I did wish he’d endorsed my fiction. However, when I workshopped the opening chapters of my novella, Dr M said I could market myself as ‘the new Jeanette Winterson’ – one of my all-time favourite authors. I might have found such praise over the top had I not seen it for what it was: an example of Dr M’s marketing savvy. He’s made a career out of publishing reworked chapters of an unpublishable novel. A sequel to his award-winning full-length experimental (God love him!) fiction, it also earned three of the five consecutive Oz Council grants he’d received, grants which helped him to place work in elite literary journals, which in turn helped him to score more grants (the opposite of a vicious circle). For most of our last class he talked about how to make writing pay; which, I’d been learning, is the raison d’être of the contemporary Creative Writing MA (at least in Sydney) – to hell with that modernist project, the advancement of literature.